Do Consumers Leave Banks Because of Fraud?

If you had to take a guess at the top five reasons people leave their bank or credit union, what would be your first three guesses? Poor service? Lack of convenient locations? Better deals or incentives elsewhere? My guess is two out of those three would factor into most financial services professional’s answers. Because they certainly would be mine!

But…what about the handling of fraud incidents with the customer/member? Would that crack the top ten of a list of reasons to leave a bank?

In 2017 alone, it was reported that there were over 14 million credit card numbers exposed and nearly 158 million Social Security numbers were exposed in data breaches. In just one year! Consumers reported $905 million in total fraud losses in that same year, which was an increase in 21.6% over the prior year (2016).

It would be no surprise, then, that the majority of consumers are worried about fraud and identity theft in today’s world. Between data breaches and fraudsters becoming more and more clever about the way in which they obtain your information, there’s a lot to be scared about. Just last week, my wife and I were sitting out on our porch enjoying the evening when she went through some voicemails from the past few days. One of them was a recording saying that she needed to call a number to verify her information, otherwise an arrest warrant would be issued for her and she would go to jail.

While I immediately told her to delete the voicemail, she told me that if I hadn’t been sitting right there, she probably would have called back! That’s how convincing and terrible-sounding these messages are! In fact, in the same report from the statistics mentioned above, 70% of identity theft in 2017 took place over the phone!

So, fraud and identity theft is a huge threat and issue with consumers today. Which makes what I’m about to share with you not very, but a little bit, surprising. 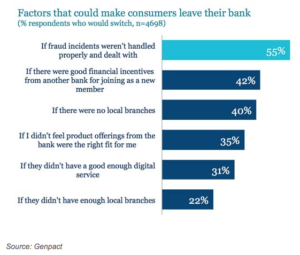 55% of consumers surveyed recently said that a factor in making them leave their current bank would be if fraud incidents weren’t handled properly and dealt with.

Over HALF of the 4,698 respondents gave that as a reason!

As community financial institutions, we rely on service to be a huge differentiator against the big bank chains. But when it comes to dealing with fraud and identity theft, or prevention of those issues, sometimes we forget how to serve the consumer. I’ve experienced firsthand how awesome and responsive some fraud resolutions can be, but I’ve also experienced how cold and process-driven some can be.

At the end of the day, we all must remember that we are dealing with people’s money and livelihoods! If we act as though fraud resolution is a huge burden for staff, that consumer will find somewhere else to go.

About the Author: Aaron Gregerson