Is Your Bank or Credit Union Like the Incredible Hulk?

Y’all know that I’m a self-proclaimed brand geek. Well, as a boy raised in the 70’s and 80’s, I’m also a comic book geek. The passing of Stan Lee, last week, got me to thinkin’.

People love the Hulk but no one went to his movies. People love community banks and credit unions, but no one goes to their branches. Hmmmm.

According to Morning Consult and as shown in a Statista infographic, the Hulk is one of America’s favorite Marvel characters. But, when we “vote with our dollars,” the Hulk’s box office take is much more Bruce Banner-sized.

Is it because the character doesn’t translate well to film? Has CGI technology not caught-up with the Hulk? Is it simply poor execution … in the story, script, acting and directing?

I work exclusively with community banks and credit unions, so the Hulk’s perception vs results really hits home.

The 2018 FIS PACE Findings, a study about consumer banking, shows that 92% of Americans are “Extremely Satisfied” or “Very Satisfied” with their credit union. Community banks earn 83% satisfaction and regional banks are at 77%. But, only 67% of customers at the top 50 banks are extremely or very satisfied.

This is great news for credit unions and community banks! But the reality gets me angry, and “you won’t like me when I’m angry.”

Only 67% of big bank customers are “very satisfied” but they have more than three quarters of the business. If that doesn’t make you turn green from rage or envy, I don’t know what will.

Do we not have enough branches?  I don’t think that’s it … the same FIS study tells us that “72% of all bank contacts are digital, with Millennials leading the way.” And, “42% of consumers use their bank’s mobile app more now than they did a year ago.” So, like CGI, is our technology not up to par with the big banks? Or is there simply a perception that the big banks have Ironman-like tech?

I don’t think that’s it either. Let’s use P-2-P payment as an example. Community banks lag big banks by only 4% in the use of digital payments and credit unions are dead even with the big guys.

Where community banks are behind in P-2-P, they are ahead in mobile apps. Community bank customers use mobile apps more aggressively than customers from other financial institutions, including the top 50 banks. 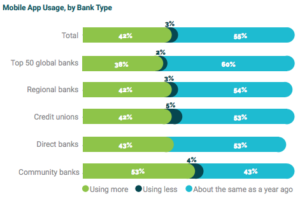 “We do not sell checking accounts and loans … we sell trust!”

Go back to the FIS study, “One in four consumers who switched or plan to switch banks have experienced fraud.”

When it comes down to it, your financial institution needs to take a page from Stan Lee’s Avengers. You need the strength and stability of the Hulk, the tech of Iron Man, the target marketing of Hawk Eye and the down-home honesty of Captain America.