I’ve been accused of having “click bait” headlines. Most of you read this title and thought, “What the heck is Eric talking about this week?” But a precious handful of you thought, “Pigeons! Oh, hell yeah!”

I spent last weekend, at a four-day music festival where Pigeons Playing Ping Pong performed. While they’ve been together since 2009, have been touring for five-years and have four studio albums, most people have never heard of them.

Even at the festival, Pigeons wasn’t a headline act … heck, they weren’t even on the main stage. But they had a following … or a flock!  They drew fans to the “small stage” as if they were a stadium headliner.

How they did it are solid lessons for all of us: 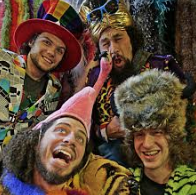 In a festival of “different” bands, Pigeons stood out. Aside from their talent, they entertained. They put as much focus on the audience as they did on their instruments. There was interaction and countless ping pong balls flying around, each with handwritten messages (some poking fun at other festival bands).

In a banking industry were staff tend to put more focus on regulations and operations than on customer service, we can take a lesson here. If you put as much focus on the audience as the job you will stand out.

The name is a great indicator, Pigeons differentiate by having fun. Their energy and attitude on stage is infectious. In fact, it’s cyclical. The band brings the funk … the audience returns the energy by dancing and singing (and pelting the band with ping pong balls) … Pigeons, in turn, feeds off the crowd and ups their game … the audience responds, and so on.

The key here is, “the band brings the funk!” Your team needs to bring the funk. Initiate the positive energy. Attack every day like they have thousands of fans in the lobby dancing and singing along. Your customers will respond and the cycle will begin.

Never Take it for Granted

There is no place in the world that Greg Ormont, PPPP’s lead singer, would rather be than on that stage playing to that crowd. You can’t fake the kind of appreciation in his face when the flock sings his lyrics back to him. Even though last night’s audience did the same thing and tomorrow’s will too, the appreciation in his expression looks like it’s the first time he’s ever heard his words sung back to him.

Your team will open deposit and loan accounts today … like they did yesterday … like they will tomorrow. But it’s special because it is the FIRST time your customer is doing it with you. There should be no place your team would rather be than in that branch helping that customer.

Work Your Ass Off

In Q3 of 2018 alone, PPPP is scheduled to play about 27 shows in 16 cities and 2 countries. They played twice during my weekend festival, once until 2:30 AM. I’ve since checked them out on YouTube and from what I can tell, they bring the energy to every show, every night. When you’re a little-known, independent band, you have to work your ass off.

Truth be told, your bank or credit union is a little-known, independent financial institution. We’re not asking your staff to tour 16 cities and 2 countries in the next 3 months, but if you’re going to compete with Chase, Wells Fargo, Bank of America and Citi, they sure need to bring the energy and work their asses off, every single day.

Rely on Word of Mouth and Digital

Pigeons Playing Ping Pong does not have a record label like Universal Music, Sony or Warner. All four of their albums are self-released. They don’t have the budgets of the big four record labels, who control 88% of the market, for promotion. So, they rely on fan word of mouth to drive new listeners to Spotify, Pandora, iHeart and YouTube rather than radio play.

You don’t have the marketing budget of the big five banks, who control more than 40% of the market share. In our experience, a focused, targeted digital effort will provide more engaging, trackable results for your budget. And, if you differentiate, have fun, never take customers for granted and work your ass off, you will earn the word of mouth in your community.